You never forget your first... 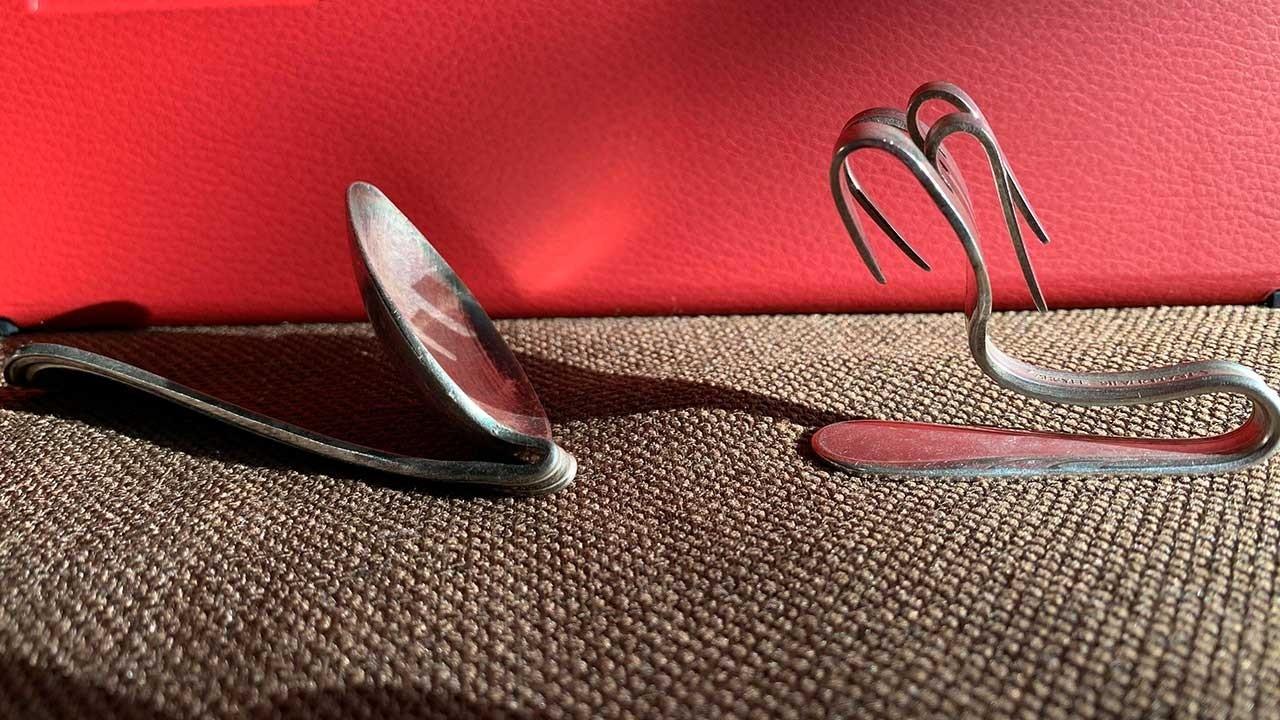 The story below explains what happened, and I'll discuss what it taught me about shaping reality. For those in a rush, here are your Digestible Downloads:

For the full story, read below:

Nervous, skeptical, and excited, my first spoon bending experience occurred in a Las Vegas ballroom with 75+ other intrepid souls. Experienced remote viewers were handing out heavy-duty pieces of silverware to attendees who brought the open-minded playfulness of a child, but also years of conditioning that this was just a magic trick - an illusion.

The attendees gathered in a large circle around the experienced remote viewers, who then proceeded to demonstrate how the process worked. They taught us to connect with the silverware, command it to bend, and release and let go of the outcome. We were asked to bring as much uninhibited, emotional energy to the proceedings, getting in a highly charged state, often through screaming and yelling.

It took a couple minutes before the first person yelled in delight, as their spoon’s handle started to look like a curly pigtail. As soon as the first success occurred, a domino effect took place. More shrieks of delight pierced the ballroom, and the energy of the room took on the ambience of a rock concert.

Yet, 45 minutes into it, I was looking at others success with more than a bit of envy. Even though I saw other people bending their spoons, I couldn’t overcome a long-standing belief that this was just some magic trick. My spoon was still in its original shape, no matter what I tried.

Sensing my discouragement, the remote viewers approached me with a fierce determination that I was not to leave the room without having bent my spoon. I could palpably feel their emotional support, and I realized how much that allowed me to relax and be present in the experience.

They also reassured me that after shouting “Bend”, I needed to shift my focus to something other than bent silverware. This act of "letting go" and "surrendering" was absolutely critical, so I could get out of my own way. As soon as I thought about what I was going to eat for dinner that evening, I felt a weird sensation in my hands. The metal felt soft like putty, and it started to move. I looked down and found the bowl of the spoon forming an acute angle with the handle.

The remote viewers then handed me a fork, asking me to do it again. As they shouted and screamed in my face (with a few obscenities thrown in for fun), not only did the fork’s handle bend, but the tines bent over like leaves on a palm tree. (The picture above represent those pieces of silverware).

While I stood slack-jawed at what just happened, the remote viewers celebrated as if I had just hit a slot machine jackpot. I looked down at the bent silverware and it hit me that I just literally shaped reality - it wasn’t a magic trick or illusion after all.  Once I physically embodied this experience, I knew that I had formed an energetic pathway, forming a connection to innate powers that were previously dormant. If I ever felt powerless in the future, I can call upon this experience when I need it.

In the years since this happened, I realized there’s an art and science behind the three steps in the process (connect, command, release/surrender).

Those who had an easier time naturally connected to their innate childlike qualities of awe, wonder and playfulness. In this state of being, the monkey mind naturally quieted itself.

Those who had a more difficult time, like myself, tended to be more analytical. Wanting to know why and how this was happening, I struggled to surrender control.  When we want an outcome so badly, it feels counter-intuitive to “let it go,” because we live in an action-oriented world. We want to feel in control. This is one of those invisible scripts I needed to rewrite, because I learned that when the monkey mind is in control, magic doesn't happen.

I've since learned many practices, physical and mental, to quiet the monkey mind. Every month during the Full Moon Meditation event that I lead, I help others quiet their monkey mind through specific practices, so they can become clear channels.

I've also found imagery that's helped me around the concept of release and surrender. When I struggle with release and surrender, I think of ordering an item from Amazon. After I send a command to my computer to make a purchase, I don’t think of where the package is at every moment. I trust the package is on its way, and I focus my attention on other matters. Even if the package gets damage or lost, I know I can send another command through my computer, and another package eventually arrives in due time.

If you're feeling preoccupied with something that hasn't manifested in your life, go play like a kid and distract yourself for a few moments. Focus your attention on someone else, and be the reason someone feels welcomed, heard, seen, and supported. Discover your power when you help someone develop their own.

A whole new approach to life awaits you.